WASHINGTON, DC — Twenty-six years after he was given 10 years left to act, Michael J. Fox continues to share his youthful smile as one of the most recognizable and beloved actors in television and film. In an exclusive interview with AARP The Magazine (ATM), Fox gives his thoughts on conquering adversity, his deep family bonds, and the importance of Medicare. Most importantly, he answers the big question: Just why is Michael J. Fox still smiling 26 years after his Parkinson's diagnosis? 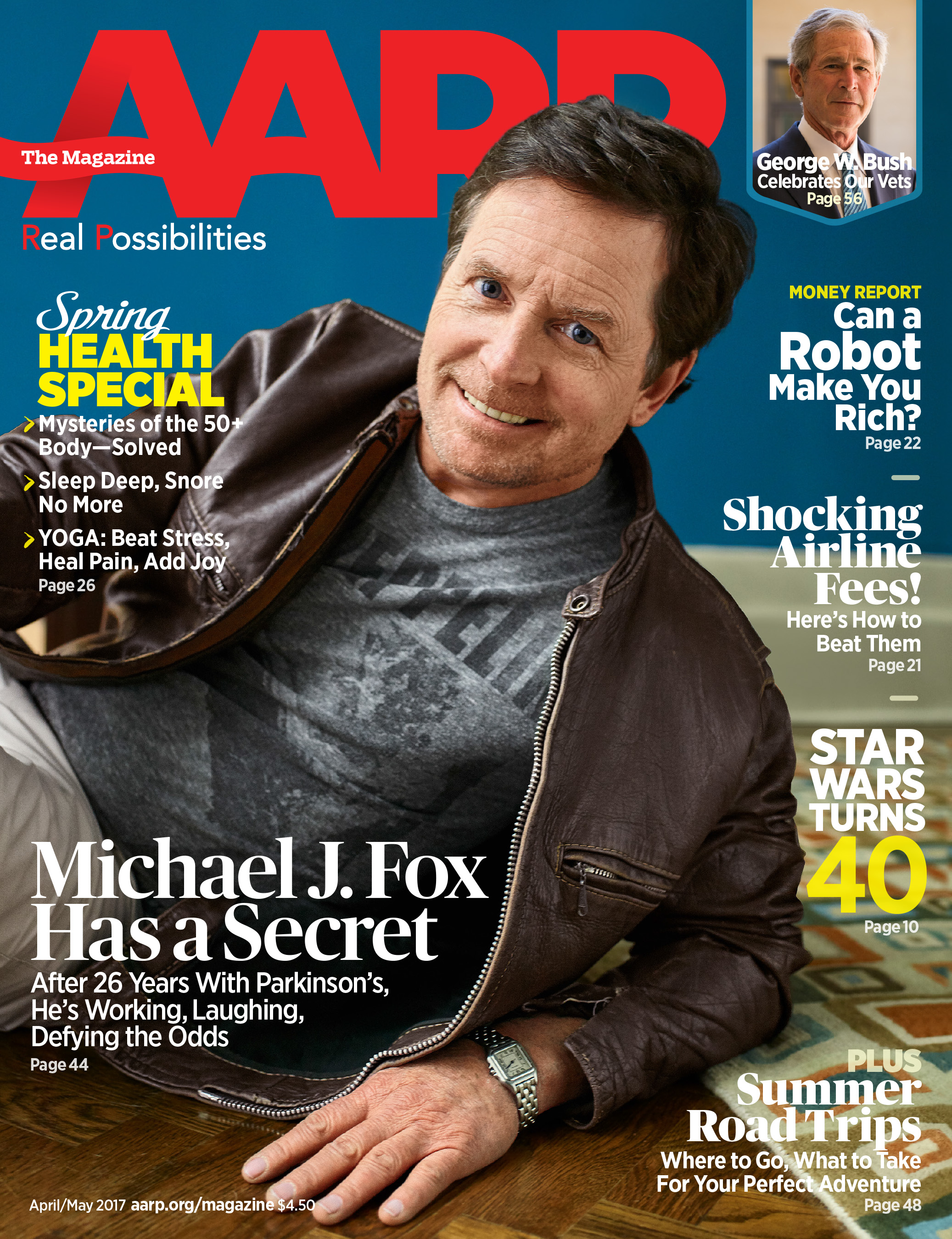 How enduring is Michael J. Fox's popularity? Look no further than that standing ovation he got after arriving onstage at the Oscars in a Back to the Future-vintage DeLorean. At 55, Fox, a father of four, is happily married to his first and only wife, actress Tracy Pollan. His classic roles over nearly 45 years in the entertainment industry include Marty McFly in Back to the Future, Alex P. Keaton on Family Ties,  Mike Flaherty on Spin City—and most recently, Lewis Canning on The Good Wife.

Off-screen, his Michael J. Fox Foundation has brought awareness to Parkinson's disease and funded more than $700 million in research. Through it all, he tells AARP The Magazine, the thing that keeps him smiling the most is his best friend: Gus, the family's dog.

On why his Parkinson's makes him laugh:

"You sure you want the truth?" Fox asks, raising his right arm and beholding the hand as it flutters about, as if in pursuit of some irksome flying pest.  "The truth is that on most days, there comes a point where I literally can't stop laughing at my own symptoms."

"Just the other morning I come into the kitchen.  Oh, good, coffee.  I'm gonna get some! No, wait – I'm gonna get some for Tracy –who's at the table with the paper.  I pour a cup – a little trouble there.  Then I put both hands around the cup.  She's watching.  'Can I get that for you, dear?' 'Nah, I got it!' Then I begin this trek across the kitchen.  It starts off bad.  Only gets worse.  Hot java's sloshing onto my hands, onto the floor..."

Fox begins to raise the volume and pitch of his voice to convey his own teetering ineptitude and denial.

"...And Tracy's watching calmly, going, 'Darling, why don't you [emphatic expletive] let me get it?' 'I'm almost there, babe!' Of course, by the time I reach the table, the cup's all but empty.  'Here's your coffee, dear –enjoy!'"

"There's the fact that it's 7 in the morning and 'this is how we begin our day – the right way!' But the thing that makes it hilarious to me is when I think of someone else watching all this and thinking, Poor Michael can't even get the coffee – it's so sad!'"

On his conversation with Muhammad Ali:

"Muhammad Ali [who suffered from Parkinson's syndrome for 32 years before his death last June] called me at home," Fox says.  "And in this raspy, paper-thin voice, he said, 'Aahhhhh…Michael, now that you're in it, we'll win this fight.' What could I say? Sitting there alone listening to Muhammad Ali, this giant – I was welling up, almost openly weeping."

On his connection to his wife through adversity:

"...Tracy was just like, 'You've got a stone in your shoe.  We'll do what we can until you can get it out.  In the meantime, if you limp with the stone, that's all right.  You can hold my hand and we'll get over that."

On his realization after he went public with his Parkinson's diagnosis:

"After I made my diagnosis public back in 1998, I began to realize that Parkinson's gives you two things to reckon with," Fox explains.  "You deal with the condition, and you deal with people's perception of the condition.  It was easy for me to tune in to the way other people were looking into my eyes and seeing their own fear reflected back.  I'd assure them that 'I'm doing great' – because I was.  After a while, the disconnect between the way I felt and the dread people were projecting just seemed, you know, funny."

On how he copes with Parkinson's

"My visible symptoms are distracting, but none of them hurt," Fox says, shrugging.  "The only real pain I get is in my feet, which sometimes shuffle and curl up in cramps when I'm sleeping – which is why I keep a very stiff pair of shoes on the floor next to my bed."

On how he has changed his method of acting:

Ever since his diagnosis at age 29, Fox has learned to adapt his method of acting that has earned him 18 Emmy nominations, with five wins. "I no longer have my stuff, the big bag of tricks I relied on in the past," Fox admits. "I can't do a double take anymore, for one.  I'm more into the moment of what I'm doing because I don't – I can't ­­– have any expectations.  I'm forced to approach every take as a whole new thing.  My experience of acting has become much more still and quiet and surprising to me.  I think I've been given a power of observation that is not self-observation – which is what acting should be."

On his relationship and connection to his doctors:

"A funny thing happened," Fox recalls. "Doctors reached out to me.  And I reached out to doctors.  More important, the Parkinson's community reached out to me, and I immediately felt better, just empowered, knowing there were people who understood what I was going through.  It was also empowering for physicians, specialists and researchers I began meeting all over the country.  They'd never had a patient coming in and saying, 'Hey, what's in your petri dish?' They'd go, 'You really wanna know?' Hell, yeah, I wanted to know! 'Then I'm gonna show you!' And so we'd be standing there, both thinking, the stuff in that dish could affect me. There was a primal satisfaction to that."

On the Importance of the Affordable Care Act and Medicare:

"On average, Parkinson's patients in this country spend $12,000 to $17,000 a year out of pocket," he recites. "Eighty percent of Parkinson's patients are on Medicare," which is why Fox and some 200 grassroots community members, representing 43 states, traveled to Washington in February to visit Capitol Hill.  "If the Affordable Care Act and even Medicare come under the knife, that's not political," Fox says. "That's our lives."

Exercise:  Especially if you have Parkinson's disease.  "We've learned it will prolong your ability to operate positively in the world."

Acceptance: "It isn't resignation, and it freed me to actively deal with and endeavor to change my situation.  I like to say, 'My happiness goes in direct proportion to my acceptance, and in inverse proportion to my expectations.'"

Honesty: Don't remain silent or ashamed about illness.  Once Fox went public with his condition, he says, "it was empowering to have people understand what I was going through – I immediately felt better."

Optimism: "I hate when people say, 'You're giving them false hope.' To me, hope is informed optimism."

Humor: "I laugh at [my involuntary movements and the scenes they create]. There are times when I love these things."

About AARP The Magazine
With more than 37 million readers, AARP The Magazine is the world's largest circulation magazine and the definitive lifestyle publication for Americans 50+. AARP The Magazine delivers comprehensive content through health and fitness features, financial guidance, consumer interest information and tips, celebrity interviews, and book and movie reviews. AARP The Magazine was founded in 1958 and is published bimonthly in print and continually online. Learn more at www.aarp.org/magazine/. Twitter: twitter.com/AARP 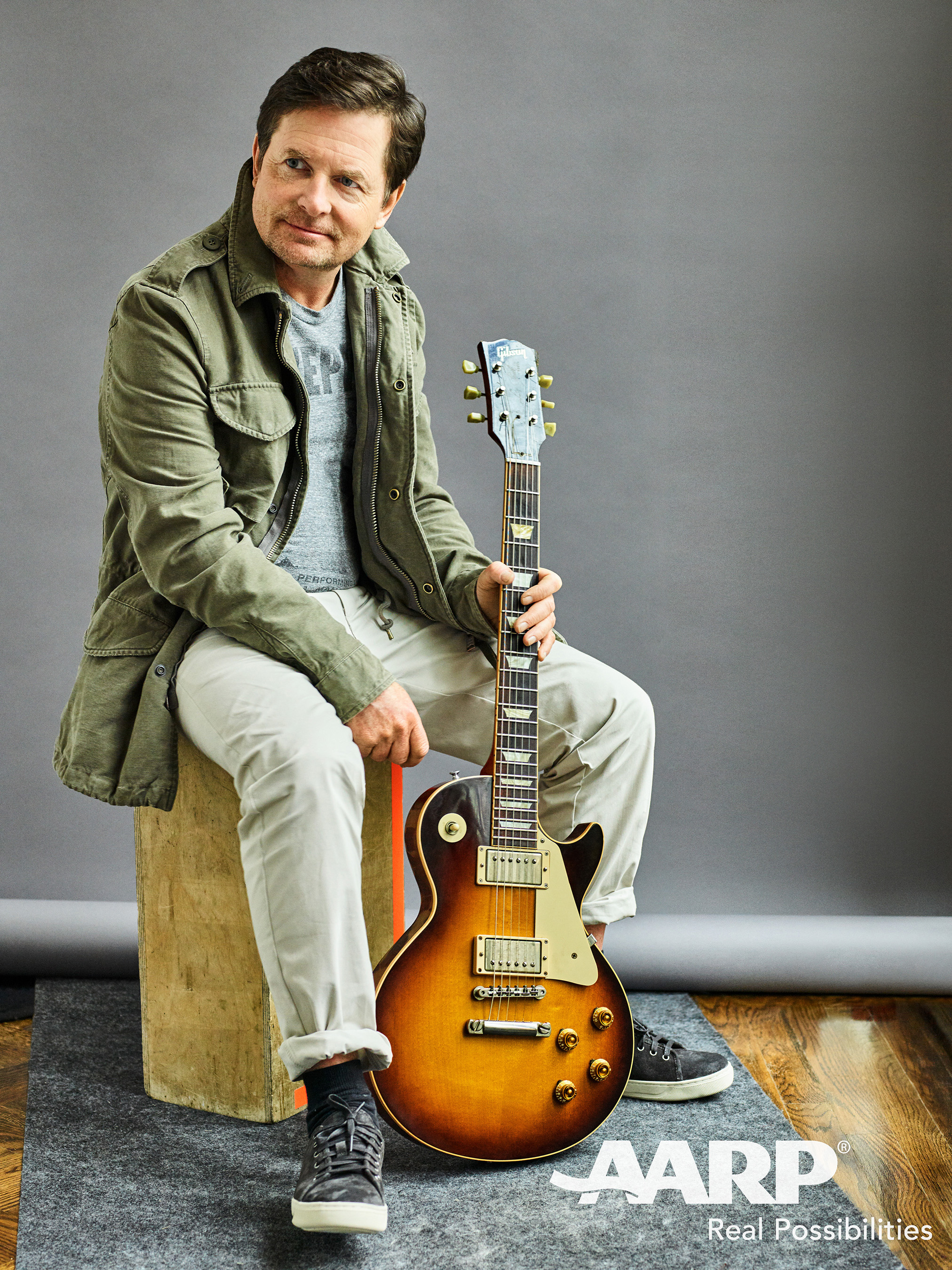 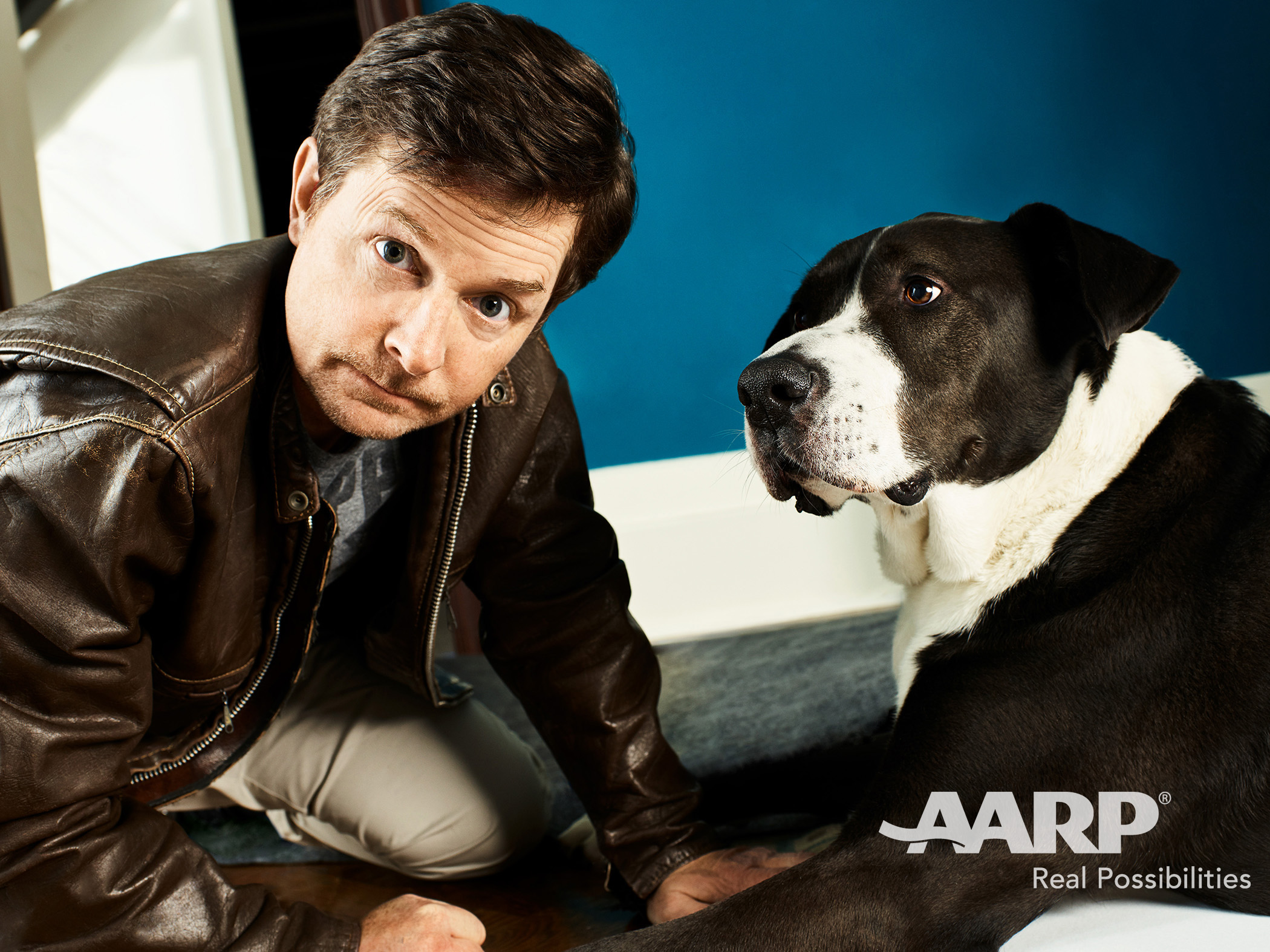 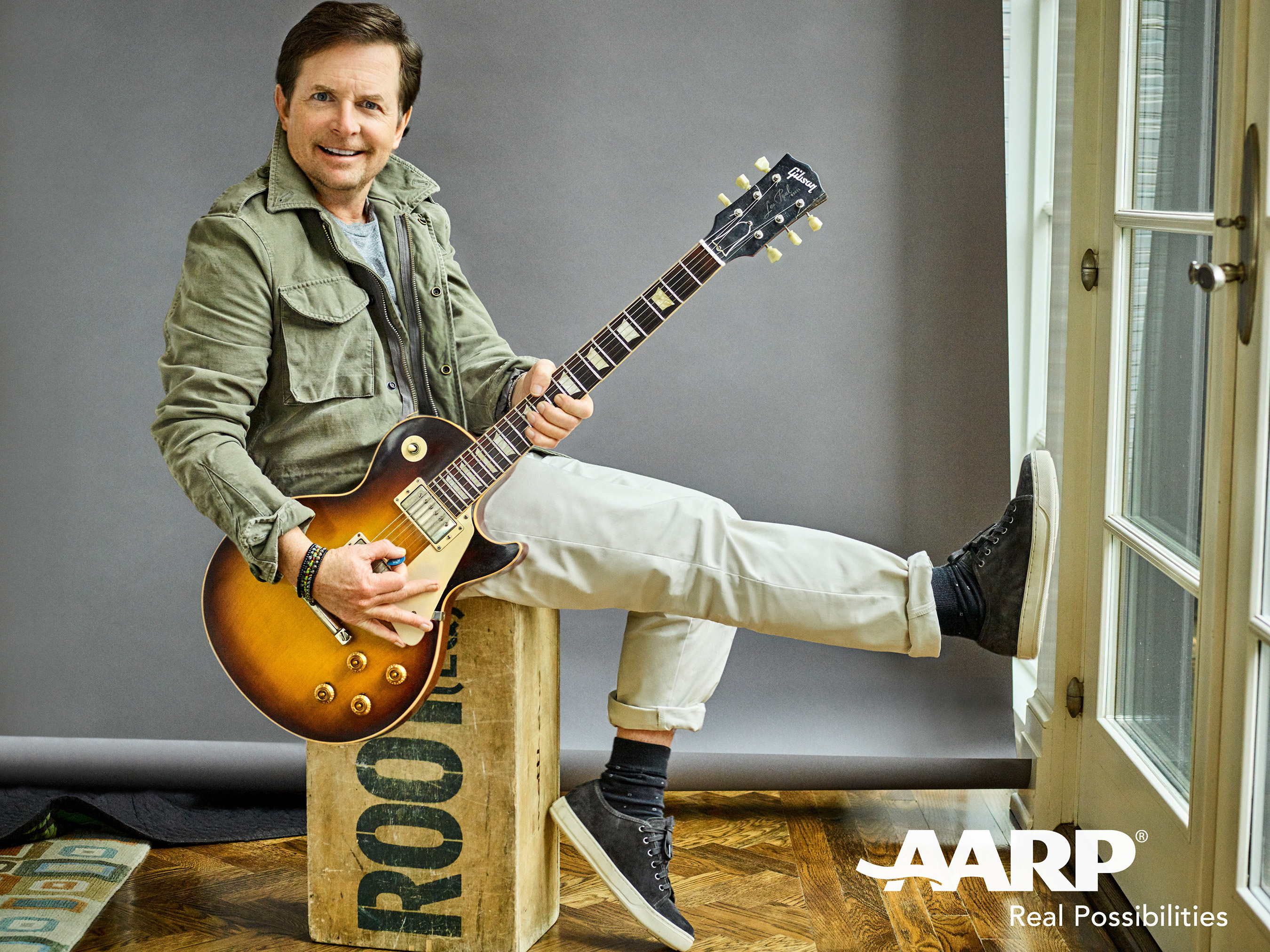