WASHINGTON, DC—At age 79, Morgan Freeman continues to draw the attention of audiences around the world with his radiant voice, gifted performances and unparalleled talent.  In an exclusive interview with AARP The Magazine (ATM), Freeman offers a pictorial history of some of his life's most intimate moments while discussing his early life, his career, and the people and places he's encountered along the way. 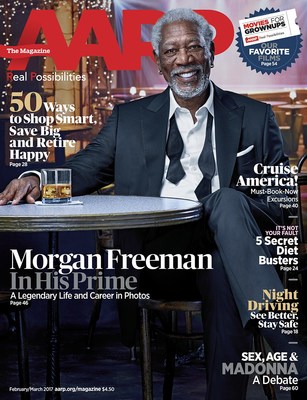 Freeman's success in film came relatively late in life, at age 50, with his Oscar-nominated role in Street Smart and a critically acclaimed performance in the off-Broadway production of Driving Miss Daisy. Until then, Freeman had begun to fear that his career was stagnating after portraying characters like Easy Reader in 700 episodes of The Electric Company.  But soon, he'd land his second Oscar nomination for the film version of Daisy, and go on to be nominated twice more, winning the Academy Award for his supporting role in Million Dollar Baby.   He's played God and the President of the United States, and his performances in films such as The Shawshank Redemption, The Bucket List, and Invictus have landed him a place among the most respected figures in modern cinema. His movies have collectively grossed more than $4 billion, ranking him the third-highest-grossing actor of all time. On February 6, 2017, Morgan Freeman will receive Movies for Grownups® highest honor – AARP's 2017 Movies for Grownups® Career Achievement Award.

On his stint in the United States Air Force
"I went into the Air Force with the idea of being a fighter pilot, but they made me a radar mechanic. I'm about as mechanical as a doorknob, and my test scores qualified me to be an electronic countermeasures operator, but they weren't having that. As I understand it, General Curtis LeMay didn't want anybody black in there. Eventually, I decided my attraction to being a fighter pilot was all movie stuff, so I said 'Never mind.'"

On his early work studying dance
"I came out to Los Angeles and started taking classes at L.A. City College. A teacher said, 'You move very well, so you should really study dance, because actors who sing and dance are what they call triple threats.' This was 1962, and I danced until about 1967. I was in a production of West Side Story. I danced at the 1964 World's Fair. With dance, you have to be all in. On The Electric Company, in the mid-'70s, they wanted me to do some ballet move and I almost wrecked myself. You can't just throw your legs up in the air."

On The Electric Company
"I did more than 700 episodes of The Electric Company over five years. This was Season 1, because Bill Cosby did only the first season, and, yeah, I was as shocked as everyone by the recent news about him. We all got along great, but by the third year, I began to hate myself for not having the gumption to quit. I was on my way to becoming Captain Kangaroo. No, no, no.  I'd come home and my wife would hand me a glass full of scotch and water. One day, she said, 'You need to quit this."

On his relationship with his mother
"Mama was born in Itta Bena, Mississippi. She had four boys and one girl. Mama was a rolling stone. She liked to go. She had a very strong moral streak: 'Do unto others as you would have them do unto you.' I'm a mama's boy, but I got in trouble with her a lot, usually for doing something neglectful. I remember we were living close to the bone in this Chicago tenement, and she made banana pudding. I lit the oven and never took the pie out. Let's just say I can still hear her hollering."

On breaking into Hollywood
"I'm 50 years old, playing off-Broadway opposite the incredible Dana Ivey. Driving Miss Daisy changed everything. We heard Warner Bros. was making the movie, but they never hire New York actors. When the movie's director, Bruce Beresford, came backstage, I said, 'So, do I get the job?' he said, 'You're kinda young.' He wanted Sidney Poitier. But when they went to Sidney, Sidney said, 'Go with the kid."

On playing POTUS
"Some people thought Hollywood wasn't ready for a black president, but I didn't consider it.  I'm not a professional black actor; I'm a professional actor. I can remember only once in the movies playing black, and that was Driving Miss Daisy."

On the current political landscape
"As for politics today, I supported Hillary in the election, and now it feels like we are jumping off a cliff. We just have to find out how we land. I'm not scared, though. I'm holding out hope that Donald Trump has to be a good president. He can't not be. What I see is a guy who will not lose."

On that Oscar win
"The truth? It was anticlimactic. I was up for best actor three times. The Oscar for Million Dollar Baby was for best supporting. I keep the statue at home in a little room in Mississippi that has tchotchkes in it, and all of the high-end awards are there: the Screen Actors Guild, the People's Choice, Golden Globe. I've stopped waiting for the best actor Oscar, because you get to a point where it's better to be nominated over and over. It's more fun that way. You get to stay in that crowd."

On the comforts of home
"… I own this blues club called Ground Zero in Clarksdale, Mississippi, where I live. We needed good music there because the place has everything else: It's beautiful. It's quiet. It's green. I started going to Mississippi in the 1970s, after my folks moved back there. I couldn't do New York anymore – living in a cave, concrete everywhere. I get to have a normal life in Mississippi. Nobody bothers me. I stay home. I golf with friends. I go have dinner. I survived inner-city South Side of Chicago, which was a hellhole, and worked hard over the years. I figure I owe it to myself to have some peace at this point in life."

On Nelson Mandela
"I'd been trying to make a movie about Madiba [Nelson Mandela] for 15 years. When his book Long Walk to Freedom was published and someone asked who should play him in the movies, he called me out. So we got in touch and stayed in touch. I went to his house in Johannesburg. I said, 'If I'm going to do this, I need to get to know you. I need to be able to touch you.' I would go and watch him and listen to him until I could capture that Madiba spirit. One day, his assistant, Zelda, came to the Invictus set. She said, 'How did he get here before me?' She thought I was Mandela. What did I take away from him? Well, yes, he's a hero, but he's also just a guy. He has all this courage, and that's what it takes to be Mandela. You can do anything with enough kindness and compassion."

On his AARP Movies For Grownups® Career Achievement Award
"At a certain point in life, if you've had some success, awards start to fall from the sky. But the Movies for Grownups® Achievement Award really means something. I started my movie career at the age of 50, and some of the best years have happened since then. I get a lot of pats on the back – they're all over the place – but this one's more than fun. It's priceless."

About AARP The Magazine
With more than 37 million readers, AARP The Magazine is the world's largest circulation magazine and the definitive lifestyle publication for Americans 50+. AARP The Magazine delivers comprehensive content through health and fitness features, financial guidance, consumer interest information and tips, celebrity interviews, and book and movie reviews. AARP The Magazine was founded in 1958 and is published bimonthly in print and continually online. Learn more at www.aarp.org/magazine/. Twitter: twitter.com/AARP