Press Releases
Inside the April/May Issue of AARP The Magazine
Celebrity Cover Interview: Michael J. Fox Has a Secret: After 26 years with Parkinson's, he's working, laughing and defying the odds
Spring Health Special: Mysteries of the Human Body Explained and The United States of Yoga
Movies: Star Wars Celebrates its 40th Anniversary! Fun facts you may not know about the beloved franchise
What I Know Now: David Hyde Pierce talks sports, his first role and signing on for 'Hello, Dolly!'
Money: Robo-Advisors! Should a robot manage your money?
Tech: Best practices for cashing in on your old tech stuff
Scams: Proven techniques to block hackers from accessing your accounts
Books: Portraits of courage, George W. Bush's third act includes helping veterans - and becoming an artist
A peek inside the April/May Issue of AARP the Magazine, with web exclusives, can be found at www.aarp.org/magazine/.

WASHINGTON, DC — In the April/May 2017 issue of AARP The Magazine (ATM), readers will enjoy an inspirational spring health special, and leading the charge is Michael J. Fox, one of the most recognizable and beloved actors in television and film. Twenty-six years after being diagnosed with Parkinson's disease, Fox carries on joyfully as an actor, father and advocate. In an exclusive interview with AARP, Fox gives his thoughts on conquering adversity, his deep family bonds and the importance of Medicare. 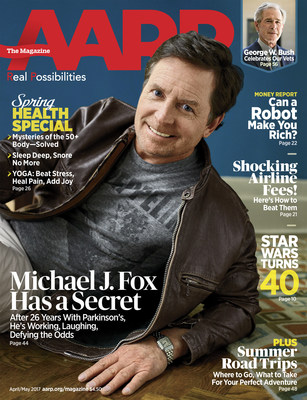 Spring Health Special:
From swollen feet to shiny domes, ATM highlights some of the very human and vaguely embarrassing conditions that stalk us as we age and what you can do about them. Check out our health special, "Mysteries of the Human Body Explained!"

Did you know that 1 in 9 Americans have embraced the ancient practice of yoga? We do it at home, at work, in the studio and in the park. Some even take a full-blown yoga retreat. In recent years, Americans have taken up yoga as never before. The April/May ATM includes a special health section entitled "The United States of Yoga," devoted to longtime fanatics and yoga newbies. The special report highlights the latest tips, best practices recommended by age, trends and also includes 21 reasons why you should do yoga at any age!

As it celebrates its 40th birthday, the Star Wars universe has never been bigger, brighter, or more awesome. ATM editors dig up 11 fun facts that even Yoda may not know about the beloved franchise. Put your Star Wars knowledge to the test with the April/May issue of ATM.

Books:
To his own surprise – and to the surprise of most of the world – the third act of President George W. Bush includes becoming an artist of surprising skill and depth. In a rare and lengthy interview, the former president talks about his post-White House journey; how he discovered painting and how it has changed him; and his deep passion for serving veterans.

Personal Finance:
Robo-advisers have come of age, says the financial industry. But should robots manage your money? Are they safe and sound enough for you and your nest egg? Learn more about the technology designed to replace human financial advisors. The April/May ATM highlights new advances in technology and the pros and cons about robo service.

Tech:
Many of us have old phones, tablets and computers sitting in the closet occupying much needed space. Why not dust off the gadgets and make some money? In the April/May ATM, Jean Chatzky shares tips on the best ways to cash in on your old tech stuff.

Scams:
On an almost daily basis we hear of another company that has come under attack by hackers. Hackers have the ability and sophisticated technology to steal data on millions of accounts at a time, so there's no better time than now to secure your accounts and hard-earned money. This month, ATM's fraud expert, Doug Shadel shares some proven techniques to build better passwords and block hackers from accessing your accounts.

About AARP The Magazine
With more than 37 million readers, AARP The Magazine is the world's largest circulation magazine and the definitive lifestyle publication for Americans 50 and older. AARP The Magazine delivers comprehensive content through health and fitness features, financial guidance, consumer interest information and tips, celebrity interviews, and book and movie reviews. AARP The Magazine was founded in 1958 and is published bimonthly in print and continually online. Learn more at www.aarp.org/magazine/. Twitter: twitter.com/AARP